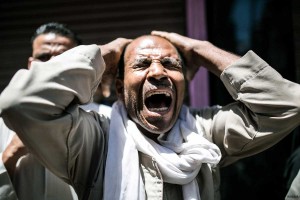 Reuters – An Egyptian court on Monday sentenced 22 members of the Muslim Brotherhood to death over an attack on a police station in the town of Kerdasa after the army removed Islamist President Mohamed Mursi from power in 2013, judicial sources said.

One other defendant, who is a juvenile, was given a 10 year sentence, the sources said.

A lawyer for the convicted men said they would appeal.