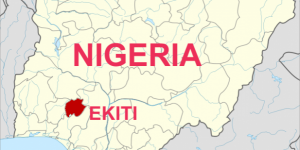 The All Progressives Congress (APC) in Ekiti State has called the attention of the security agencies and Nigerians to the spate of security breaches in the state. It fingered Governor Ayodele Fayose as being responsible for the condition of the state.

Publicity Secretary of the party, Taiwo Olatubosun, in a statement in reaction to Friday morning blockade of entry points to Ado-Ekiti by the supporters of the governor, said that the governor ordered the blockade of the entry points to prevent the 19 APC lawmakers from accessing the House of Assembly to carry out their legislative duties.

“In this latest show of shame arising from his apprehension about Thursday’s Abuja Federal High Court’s refusal to grant his application to stop the 19 APC lawmakers from impeaching him, he employed the services of the drivers union to cause untold hardship to Ekiti people who were prevented from going about their lawful duties.

“It is so bad that the dead was not spared from this barbaric act as a casket conveying a dead body was forced open by Fayose’s thugs because they suspected it could be Speaker Adewale Omirin who was about to be smuggled into the Assembly.

“A man who claims to be popular does not need to employ the services of thugs and the coercion of all labour unions into embarking on a solidarity rally to prove that he is popular.

“In our view, Fayose ought to have subjected himself to the scrutiny of the lawmakers who have pledged to give him a fair hearing on the allegations of constitutional breaches against him,” he said.

“We urge the security agents to be alive to their duties by calling the governor to order as he cannot continue to put Ekiti State under needless siege. This impunity must stop before Fayose turns Ekiti into a banana republic,” Olatubosun concluded.