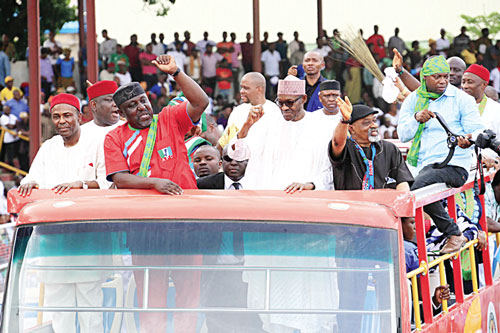 A former Governor of Anambra State and leader of the All Progressives Congress, APC, Dr. Ogbonnaya Onu, has appealed to the Igbos in the South-East to support the incoming administration of the President-elect, Muhammadu Buhari.

Mr. Onu made the call Wednesday during a rally organised by the South-East APC in Owerri, Imo State, to celebrate Mr. Buhari’s victory in Saturday’s presidential election.

He noted that the “new direction” which Nigeria now faced following the historic victory of the opposition APC, necessitated the call, therefore, the people of the South-East must not be left out.

He also stated that the Peoples Democratic Party had failed to justify the support of the South-East over the years.

“South-East people need Nigeria just as it needs them. Igbo is the only ethnic group in Nigeria whose people cannot be found as indigenes of any other country in the world. Nigeria is the only country the Igbos know”.

He said the APC leaders of Igbo extraction, including himself and Imo State Governor, Owelle Rochas Okorocha, played a major role in the formation of the party and assured his kinsmen that their interests would be secured in Mr. Buhari’s government.

Dismissing the results of last Saturday’s elections where President Goodluck Jonathan won with a landslide in the five South-East states of Imo, Anambra, Enugu, Ebonyi and Abia, the APC chieftain said, “Results were written in private homes. Those rejected in the election were declared winners. APC members were intimidated, harassed and humiliated”.

Mr. Onu’s claim that the PDP rigged the Saturday’s elections in the South-East was corroborated by Mr. Okorocha, who also spoke at the rally.

“There was no election in the entire South-East on the March 28. The PDP leaders, with the aid of the military and INEC officials, intimidated and harassed our people and thereafter wrote the results in their homes”, he said.

He, however, assured APC supporters and natives of Imo State that the party would do everything necessary to recover the stolen mandate of its candidates in the state.

Speaking on the political repercussion for the South-East following the massive lose APC suffered in the region, Okorocha said, “It is very painful for the Igbo to lose the position of the Senate President after they have been denied leading positions in the country for a long time. We saw it coming and we told our political leaders why Ndigbo should embrace the APC, but they did not believe us.

“Now the story has changed. The PDP, which they have been following all these years with nothing to show for it, is now an opposition party”.

Senator Chris Ngige, who lost his bid to return to the senate, described the March 28 election as the end of “bad election in the country”.

He also expressed satisfaction with the knowledge that the PDP’s alleged involvement in electoral irregularities in the South-East could not stop Buhari from winning the election.