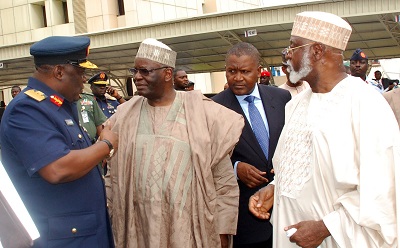 The Chief of Defence Staff, Air Chief Marshal Alex Badeh, has ruled out the possibility of a military takeover as Nigeria transits from the current administration to another, saying the era of military rule in the country is gone forever.

The CDS reiterated the Nigerian military’s commitment to continue to respect democratic institutions in the country.

Badeh made this known yesterday when the military high command played host to a high powered delegation of the National Peace Committee for the 2015 General Elections, led by its chairman and former head of state, General Abulsalami Abubakar (retd).

“The era of military rule is gone forever and ever in this country. In fact if there was military rule I am not sure if I could have been here”, Mr. Badeh said. “We are the armed forces of Nigeria and not that of any political party and will be subordinate to the constituted authorities”.

He said the present military leadership is a product of democratic governance and would not embark on activities that could jeopardize Nigeria’s electoral process.

“I remember when we asked for more time to embark on what we are doing but there was a lot of misgiving. But we are happy that we are able to ensure that some exercise their choice of who to govern them. Even though we did not achieve 100 per cent, but we are able to secure the major ones”, he said.

The Defence Chief also assured Nigerians that the military will remain neutral in the discharge of its constitutional responsibility during the governorship and state assembly elections tomorrow, Saturday.

He also commended the armed forces for liberating most communities in the North East from Boko Haram insurgents.

A member of the committee, Ibrahim Gambari, also commended the military for its professionalism during the March 28 presidential and National Assembly elections.

He, however, called for improvement in tomorrow’s governorship and house of assembly polls.

Mr. Gambari, while lauding the conduct of the military in previous national assignments, recalled that it had been responsible for enforcing peace in other countries including Rwanda, Sierra Leone, and Liberia.

“So you have distinguished yourself and proved your professionalism and all we ask is for you to enhance that in the forthcoming elections. We also commend you by ensuring that the people in the North East have the rights to exercise their franchise and we want you to ensure that the job is finished”, Mr. Gambari said.