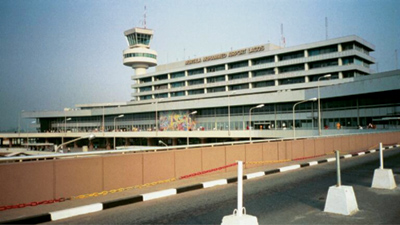 The Federal Airports Authority of Nigeria on Sunday, raided the Hajj/Camp terminal of the Murtala Muhammed Airport, seized and destroyed goods.

News Agency of Nigeria reports that the special raid was supervised by the Chief Security Officer of the terminal, Mr. Uche Ukeni.

He said a female suspect was arrested during the raid.

Ukeni added that the suspect would be taken to the Tango City Police Post, inside the MMIA, for prosecution.

NAN reports that two canopies alleged to be illegally set up, one being used as church and the other used for selling assorted drinks, were discovered by the FAAN security men.

Ukeni told newsmen that the agency carried out the raid as a way of sanitizing the cargo terminal and sacking touts and hawkers operating illegally in the area.

He said the illegal activities often allowed people, who have no business at the airport, to loiter around as touts, causing unnecessary panics and mayhem.

He added that the female suspect, arrested during the raid, claimed to be a food vendor, observing that there was nothing to prove what she claimed to be during her arrest.

“We took away more than five coolers of cooked rice and stew, 50 cartons of bottle water, 30 packets of sachet water and 10 suckers of pineapple.

“These seized items would be taken to the graveyard along the airside at the MMIA for destruction”.

He explained that any person interested in operating business at the airport should contact the commercial department of FAAN for documents and approval.

The CSO said the authority would continue to conduct the raid.

He directed the FAAN management to clear the overgrown grasses opposite the Nigerian Aviation Handling Company cargo offices.

He noted that illegal activities were being carried out around the area covered by the overgrown grasses while people also defecate in the area.

A cargo operator at the terminal, Mr Aliu Danbaba, told NAN that the people made use of the shanties to cool down stress after work.

He said items being sold at the shanties were cheaper than buying them inside the approved shops at the terminal.

Danbaba added, “Things are very expensive in the shops here; we prefer patronising the shanties because their items are cheaper and easy to access.

“We are not happy with the raid by FAAN.

“Where do they want these people to go? These traders have families to care for and this is where they make their daily bread”.