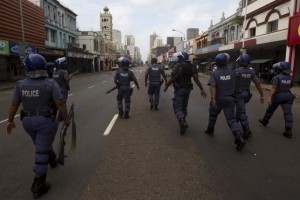 Immigrants in downtown Johannesburg, South Africa’s biggest commercial city, shut their shops on Wednesday as a wave of anti-foreigner violence that has killed four people near the city of Durban threatened to spread, police said. Reuters was there:

South Africa has erected safe camps in Durban, a key port on South Africa’s Indian Ocean coast, for fleeing immigrants, whose shops were looted and burnt in the two-week old violence.

There were no reports of looting or violence in Johannesburg, the epicenter of the 2008 xenophobic attacks that killed more than 60 people. “Foreigners in Johannesburg have been observed closing their shops. We don’t know why but police are keeping an eye on the situation,” Johannesburg police spokesman Wayne Minnaar said.

A mobile phone text message sent to shop owners warned them to shut their premises, claiming that “Zulu people are coming to town … to kill every foreigner on the road”.

One shopkeeper selling shoes, kept his shop open. “The guys are scared that is why they are closing,” said the shop owner who said he was Pakistani and gave his name as Rashid.