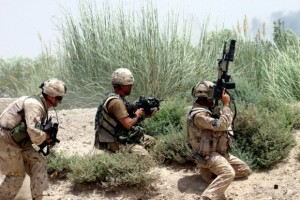 Not less than five Malian soldiers lost their lives in an attack by Tuareg separatist rebels in a town close to the border with Mauritania, a Malian military source said on Thursday, further clouding prospects for a U.N.-brokered peace deal. Reuters have more:

Wednesday’s attack on the town of Lere, southwest of Timbuktu, was the latest in a series of clashes between the rebels, the Malian army, and a militia allied to the government. The United Nations has warned that the growing tensions have endangered the deal due to be signed in the Malian capital Bamako on May 15.

“They attacked with at least 10 vehicles, six of them equipped with machine guns,” the military source said, asking to remain anonymous. He added that several assailants were killed in the fighting and there could be other civilian victims.

The northern half of Mali has witnessed several days of violence. Pro-government militia seized Menaka, near the Niger border, on Monday, while two soldiers and a civilian were killed on Wednesday when separatist rebels attacked Goundam, which lies between Timbuktu and Lere.

In another sign of mounting insecurity in the West African nation despite the presence of 10,000 U.N peacekeepers, two women were killed when a car they were traveling in hit a land mine near the northern town of Gossi on Thursday.