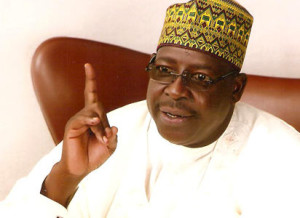 Imam’s name was submitted to INEC as governorship candidate of the PDP in Borno State after the party’s national headquarters in Abuja issued the Borno governorship ticket to him late last year instead of Lawan, who was initially declared as candidate during the party’s primaries.

Lawan had immediately challenged his replacement in an Abuja court that eventually ruled in his favour early this month and asked INEC to recognise him as the authentic governorship candidate of the PDP instead of Imam.

Imam, who is a former governor, Senator Ali Modu Sheriff’s preferred choice, insisted he was the candidate of the PDP and had appealed the court’s ruling but the case was to be determined on Thursday 2nd April, 2015.

A memo dated 27th March, 2015 from the INEC headquarters in Abuja, which was signed by secretary of the commission, Ibrahim K Bawa with reference number INEC/LEG/DR/356/VOL.1/79, which was issued to journalists, directed the Borno State Resident Electoral Commissioner to effect the change of Imam’s name with immediate effect.