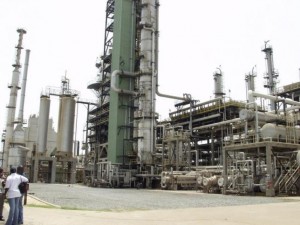 When it opened in 1963, Ghana’s oil refinery symbolized pride and hope for the first African country to escape colonial rule. Now the plant stands idle in a sign of the economic shadow that has crept over one of the continent’s brightest stars. Reuters have more:

The discovery of oil in Ghana in 2007, added to its gold and cocoa wealth and its other major asset, stable democracy, gave it a chance to start catching up with oil giant Nigeria and regional West African economic powerhouse Ivory Coast.

The year after oil began flowing in 2010 economic growth spiked to 14.8 percent, one of the highest rates in the world. Now, however, the country faces high levels of public debt, a currency that has fallen sharply, a yawning budget deficit and inflation that recently rose as high as 17 percent.

Chronic power shortages have led to lengthy rolling blackouts, angering voters and raising business costs. The growth that propelled Ghana to official “middle income” status in 2010 is forecast at a modest 3.9 percent this year, lower than the average for sub-Saharan Africa. Economists say Ghana’s prospects are still bright over the medium term but only if it quickly restores fiscal stability.