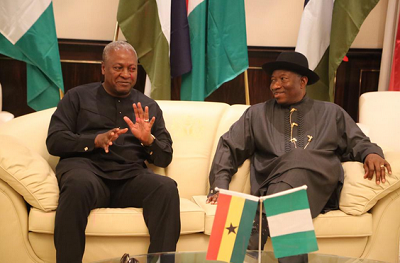 The Ghanaian President said Jonathan, by his action, had earned the respect of Nigerians and the international community.

Mahama made this known in a chat with State House correspondents shortly after holding a closed-door meeting with President Jonathan at the Aso Rock, Presidential Villa, Abuja.

According to Mahama, the Economic Community of West African States, ECOWAS, which he chairs, expected a smooth transition from Jonathan to the President-elect, Maj.-Gen. Muhammadu Buhari (retd.).

He said, “I took the opportunity to commend him (Jonathan) for the statesmanship that was displayed after the election.

“We all knew that he congratulated President-elect, Buhari, after the election results and he conceded.

“We expect a smooth transition and possibly the role that Nigeria plays in the ECOWAS being the biggest economy not only in our sub-region but in the whole continent”.

The Ghanaian leader noted that Nigeria was a very important member of the sub region and he expected that the country would continue to play this prominent role in the ECOWAS sub-region.

He said because there is a special relation that exists between Nigeria and Ghana, he decided to congratulate Nigerians on what has been a very good election.

Mr. Mahama added that the two countries would continue to hold a special relations and be very close to each other.

“We share the same values and more often than not, we agree on international issues and we will continue to share that relationship and am sure it will make the bonds between our countries stronger”, he added.

Mahama stressed that as the chairman of ECOWAS, the group also extended its commendation through him to Nigerians following a very successful elections.

He said, “If you recall before the elections on behalf of the authority of ECOWAS, I gave a solidarity message to Nigerians to step up and consolidate your democracy by having a peaceful, free and transparent election.

“I believe that the whole world is congratulating you on the peace and stability that has continued to endure before, during and after the election.

“I have been conferring with President Jonathan on several issues in respect of ECOWAS.

“We are due to have a summit and we discussed issues about the summit and a few outstanding issues relating to ECOWAS”.