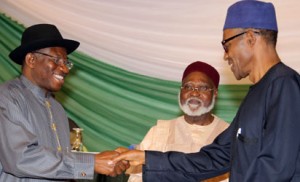 A Niger Delta pressure group, the South South Voice has described as unacceptable the way the North and the West truncated the second term ambition of President Goodluck Jonathan. It warned that the nation may face another round of crisis unless issues relating to alleged conspiracy against the people of the South South is addressed.

The group, in a letter addressed to President Jonathan, signed by its National Coordinators, Victor Tamarapreye and Michael Akpodore alleged that Jonathan was manipulated out of the contest therefore it will be unjust to hand over power to Muhammadu Buhari who the group described as the beneficiary of the “Hausa,Yoruba conspiracy”.

“We the undersigned for and on behalf of numerous concerned people of the South South geo-political region of Nigeria, wish to inform you that, we are not happy with the way and manner the election was conducted and it will be wrong to hand over power to the wrong person.

“The election was rigged massively to favour Gen.Buhari and we will not accept such result. Even though we are heading to court but we want to warn first so that Nigerians will understand where the trouble is coming from when it commences.

“Secondly, you Mr President was coaxed and intimidated to accept the outcome of the election by the International Community and the so called peace makers Committee in Nigeria.

“There was a gang-up against you from the Northern part of Nigeria irrespective of party line, as well as the issue of under-age voters which we all saw in several northern states. You have performed more than any Nigerian president has ever produced in your first term in office,” the letter read.