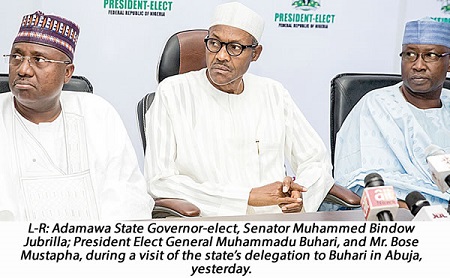 President-elect, Maj. Gen. Muhammadu Buhari (retd.), on Sunday expressed his administration’s readiness to beam its searchlight on the controversial $20 billion that was supposed to have been remitted by the Nigeria National Petroleum Corporation, NNPC, to the Federation Account, but could not be accounted for.

The president-elect stated this when a delegation of party supporters and newly elected officials on the platform of the All Progressives Congress from Adamawa State, led by the state’s governor-elect, Bindow Jibrilla, paid him a congratulatory visit at his campaign office in Abuja.

The immediate past governor of the Central Bank of Nigeria, CBN, Sanusi Lamido, had alleged that the $20 billion, which accrued from the sale of Nigeria’s crude oil by the NNPC could not be accounted for.

Following the controversy the allegation generated and the purported embarrassment it caused the administration, President Goodluck Jonathan sacked Mr. Sanusi from office.

Shortly after, the CBN helmsman was crowned the Emir of Kano after the death of Ado Bayero, the former emir.

Buhari, who spoke in the local Hausa language, expressed surprise that instead of probing the allegations by the former CBN boss, the authorities chose to disgrace him out of office.

The president-elect, renowned for his tough stance against corruption, said although he received information that some persons already started returning money to government coffers, he would only believe it when he “sees it”.

“I heard that some people have started refunding money, but I will not believe until I see it.

“His royal highness, the Emir of Kano, Sanusi Lamido Sanusi was removed from the Central bank because he said that about $20 billion was missing, instead of the government to investigate the matter, they refused, instead they sacked him. As God will have it, he is now the Emir of Kano and that is exactly what he wants to be.

“He has already written all the detail report on it, the incoming government will not ignore it, even though we have promised to draw a line, but $20 billion is too big to ignore. This is Nigerian money and it must be investigated”, Mr. Buhari said.

The president-elect also empathized with the delegation for the suffering of the people of Adamawa State in the hands of Boko Haram terrorists.

According to him, the Boko Haram elements were not pursuing any religious agenda since they attacked people of all religions.

“We thank God that our people have now realized that it is not about religion, it is about terrorism which has no basis in both Islam and Christianity. None of these two religions encourage injustice.

“So for Boko Haram to go to and kill people in mosques, churches, markets, bus stations or slaughter children in schools while they were asleep, and shout Allahu Akbar!

“Whoever did that does not know the meaning of what he is saying or does not believe in it. We hope when we resume, we pray to God to help us end terrorism in Nigeria”.

He also blamed the ruling Peoples Democratic Party, PDP, for allowing the Boko Haram insurgency to fester in the state.

“PDP for the last 16 years has done virtually nothing in your state. Thank God it is not my party that has subjected you to these hardship, it is not the defunct ANPP, CPC or ACN, so I urge you to wait for the next four years and see how we would start our own government”, he said.

Mr. Buhari also used the occasion of the visit to reiterate his resolve to tackle issues of security, youth unemployment, and corruption as priority of his administration.

“These are three things that I promise to give priority on”, he said.