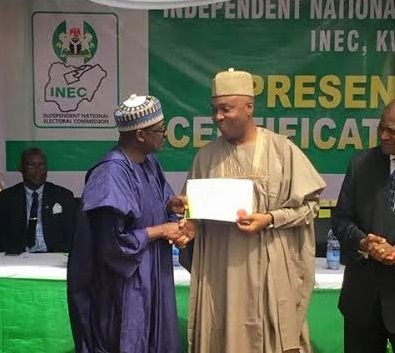 As the race for who will emerge Senate President in the 8th legislative assembly gathers momentum, the Senator representing Kwara Central, Dr. Bukola Saraki, has expressed confidence of emerging the preferred choice for the position.

Saraki, who spoke with newsmen when he received his certificate of return in Ilorin, the Kwara State capital on Monday, said he was hopeful of emerging as president of the Senate when the 8th National Assembly is inaugurated in June.

“I think we’ll continue to move around and talk to our people, at the end of the day, we are hopeful”, he said.

Saraki also commended the people of the State for voting for APC in all elections, saying the victory was a challenge for all elected office holders to perform.

Governor Abdulfatah Ahmed in an open campaign for Saraki, who is his immediate predecessor in office, said the senator was qualified for the office.

He said: “We are grateful to our political leader in the state for guiding us aright. Indeed, most of what we are witnessing today in the state and other parts of the country happened because our leader and others chose to stand up for change at a critical point in Nigeria”.