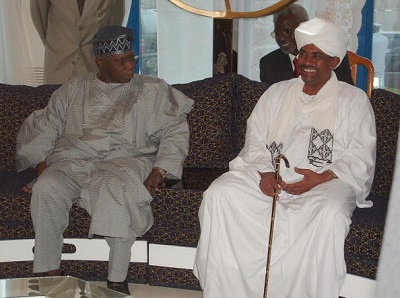 Former Nigerian President, Chief Olusegun Obasanjo, on Monday said he was ready to do everything possible to halt the growing trend of insecurity in Africa.

He stated this shortly after meeting with Sudanese President, Omar al-Bashir in Khartoum, where he expressed his concern over the continent’s growing insecurity.

Mr. Obasanjo was in the troubled North African country to discuss insecurity and instability in Africa, especially the crisis in Libya, which has adversely affected other parts of Africa.

The former Nigerian leader told journalists that the session provided both leaders the opportunity to examine peace and security issues in Africa, particularly the situation in North Africa.

“My brother (President al-Bashir) and I have agreed to work together with other partners to ensure that stability is achieved in the region and across the continent”.

Ex-President Obasanjo chairs the Africa Union’s commission of inquiry on South Sudan and has been a leading advocate of peace and security in Africa.