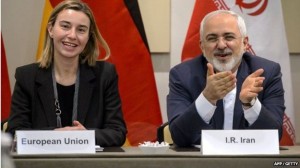 The UK has said key issues still need to be tackled at talks on Iran’s nuclear programme but agrees with the Iranian and Russian delegates that there is “a broad framework of understanding”. BBC was there:

Foreign Secretary Philip Hammond said: “We hope to get there during the day.” However, a number of ministers have left the talks and China warned compromise was essential, otherwise “all previous efforts will be wasted”. A deal would curb the nuclear programme in return for sanctions relief.

Negotiations between the so-called P5+1 – the US, UK, France, China and Russia plus Germany – and Iran resumed on Wednesday at Lausanne’s Beau-Rivage Palace hotel after overrunning a 31 March deadline for a deal.

The P5+1 deal seeks to ensure Iran could not assemble a nuclear weapon in less than a year. The Iranians insist that they have no such ambition. Mr Hammond told the BBC: “I think we have a broad framework of understanding, but there are still some key issues that have to be worked through.

“Some of them are quite detailed and technical so there is still quite a lot of work to do but we are on it now and we’ll keep going at it.