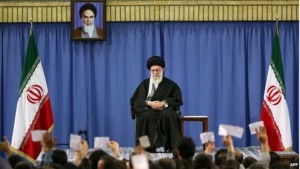 Iran’s Supreme Leader, Ayatollah Ali Khamenei says that there is “no guarantee” of a final deal with world powers on the country’s nuclear programme. BBC reports:

Earlier, President Hassan Rouhani had said Iran would not sign a final deal unless sanctions were lifted “on the first day” of implementation. Last week Iran and world powers reached a framework agreement on the issue.

Since then, Iranian and US officials have been trying to persuade hardliners in both countries to back the deal. The deal stipulates Iran must slash its stockpile of enriched uranium that could be used in a nuclear weapon, and cut by more than two-thirds the number of centrifuges that could be used to make more.

In return, UN sanctions and separate measures imposed unilaterally by the US and EU will be lifted as the global nuclear watchdog, the International Atomic Energy Agency (IAEA), confirms Iranian compliance.