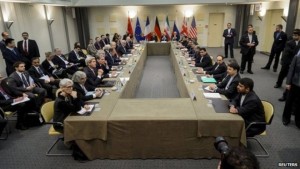 The prospects for a preliminary agreement between Iran and other world powers on Tehran’s nuclear program were finely balanced between success and collapse on Thursday, diplomats told Reuters.

The negotiations, aimed at blocking Iran’s capacity to build a nuclear bomb in exchange for the lifting of sanctions on the country, are bogged down over details of the accord even though the broad outlines of an agreement have been reached.

Ploughing on beyond a March 31 deadline, negotiators talked until 6 a.m. on Thursday in the Swiss city of Lausanne, breaking off for three hours to rest.

Accounts differed on the extent of progress, with Iran’s Foreign Minister Mohamad Javad Zarif calling it “significant” but a Western official describing it as “limited”.