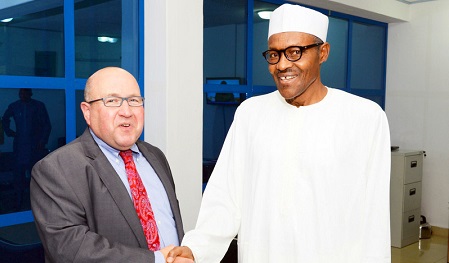 The State of Israel has expressed its willingness to assist the in-coming administration of Maj. Gen. Muhammadu Buhari (retd.) to fight Boko Haram insurgency in the country.

The Israeli President, Reuven Rivlin, according to a statement by the Media Director of Buhari Campaign Organisation, Mr. Garba Shehu, made the pledge in a congratulatory letter signed by him and delivered to the President-elect on Monday in Abuja.

The letter, which was delivered by the Israeli Ambassador to Nigeria, Uri Palti, quoted the Israeli president as pointing out that the two countries faced “similar dangers and challenges in our daily struggle against those who want to terrorise our citizens”.

He said, “The latest news regarding the Boko Haram-ISIS alliance underscores the need for like-minded countries to unite in the fight against such radical terrorist organisations.

“I assure you that in this important campaign, Israel stand shoulder-to-shoulder with Nigeria.

“I wish you every success in the challenging task ahead and trust that under your presidency, the relations of friendship and cooperation between Nigeria and Israel will continue to expand and strengthen”.

Buhari, according to the statement, expressed his warm appreciation for the Israeli gesture and pledged to work with all countries to their mutual benefits.