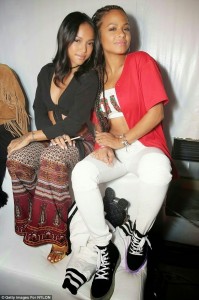 It seems like Karrueche Tran is definitely through and done with Chris Brown.

“Karrueche tried to show him what he’s missing,’ ‘She wasn’t letting Chris ruin her night.’Instead of giving Chris the attention he wanted, Karrueche instead spent time dancing and hanging out with gal pal Christina Milian, Dressed in a revealing black top and a red-hued peasant skirt, Karrueche looked comfortable but impossible to miss.

“Chris turned up to Nylon’s Midnight party early, with him and his large entourage taking a prime table spot next to the dance floor,’ a source at the party said of the Run It singer.He then stuck mostly to that area of the party, ‘laughing and dancing around at his table, at times joined by Justin Bieber and Azealia Banks.”