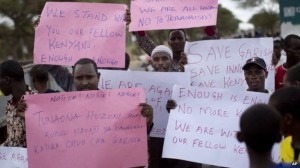 Five people are in custody following the al-Shabab attack in eastern Kenya on Thursday which left almost 150 people dead, officials say. BBC was there:

Some of the suspects were arrested while trying to flee to neighbouring Somalia, the internal security ministry said. At least 148 people – mostly students – were killed when gunmen attacked a university campus in Garissa. Al-Shabab has since pledged a “long, gruesome war” against Kenya.

The militant group said its attacks were in retaliation for acts by Kenya’s security forces, who are part of the African Union’s mission in Somalia against al-Shabab. In Garissa, a survivor has emerged from hiding more than two days after the assault was unleashed.

The 19-year-old girl was found unhurt in a cupboard on Saturday, but security officials had to bring in a teacher to convince her that it was safe to come out, the BBC’s Andrew Harding reports. She told reporters that she drank body lotion when she felt hungry.

Four other people were found alive on the campus on Friday, including two suspects. One was said to be a Tanzanian national with no known links to the university.