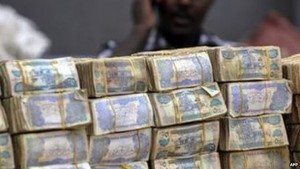 Kenya’s government has ordered the closure of 13 money transfer firms in order to prevent militant Islamists from using them to finance attacks, the interior minister has told the BBC:

The bank accounts of 85 individuals and “entities” had also been frozen, Joseph Nkaissery added. Those targeted include a Somali-linked bus company and hotel. An assault by the Somalia-headquartered al-Shabab group killed 148 people at Kenya’s Garissa University last week.

Kenyan officials have repeatedly accused Somalis in the country of colluding with the militants.

Nearly 500,000 refugees are in the country – many of whom fled decades of conflict and drought in Somalia. Kenya also has its own Somali population – most of whom live in the capital, Nairobi, and in the north-east, where the university attack took place.

Somalis say most of them are law-abiding citizens of Kenya, and they have also bore the brunt of al-Shabab’s insurgency.