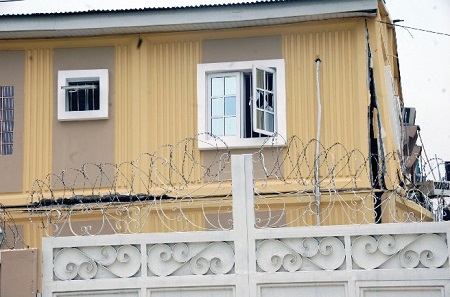 Wife of the Deputy Governor of Kogi State, Mrs. Tokunbo Awoniyi, on Saturday sustained injuries after their Ikoyi residence collapsed.

The incident, which occurred at about 7am at 19b, HFB Way, Dolphin Estate, Ikoyi, Lagos, was said to have been caused by a cooking gas explosion which made the building to cave in.

Also injured were three of the deputy governor’s domestic staff, who were said to be at the residence at the time of the collapse.

Also injured in the incident was the family’s driver, who was said to be washing car outside the building.

Meanwhile, all the victims have been rushed to St. Maria Hospital in Yaba.

Confirming the incident, the spokesman for National Emergency Management Agency (NEMA) South-West zone, Ibrahim Farinloye, said the cooking gas exploded around 7:15am and was suspected to have caused the building collapse.

Farinloye, who confirmed that the building belonged to the Kogi deputy governor (Yomi Awoniyi), stated that personnel of the Lagos State Building Control Agency have moved to the scene to determine the next line of action.