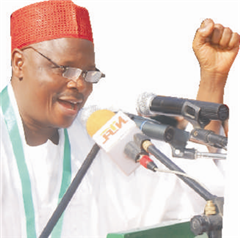 Kano State governor and Senator-elect, Rabiu Musa Kwankwaso has cautioned the leadership of the All Progressives Congress (APC) against further delays in the zoning of federal elected offices.

He said that was the mistake made by the People’s Democratic Party (PDP) in 2011 which resulted in the obstruction of the zoning arrangement and the crisis that affected the party.

The governor who spoke with newsmen in Abuja, said “my advice to my party is that they should quickly do it. Those of us who witnessed what happened in 2011, I don’t believe that that party should waste any more time. Because the implication of delay is that the people in some zones will go round the country mobilising support for themselves and if the zoning decides to come late they will be so strong in their campaign such that they can disobey the party just as we saw during the Tambuwal case in 2011.

“Tambuwal went round, we gave him our words that we will support him and when the zoning came late we had already committed ourselves and the party at the end of the day was humiliated because many of us didn’t want to change our position as we had already promised to support him.

“Things were not the same again in the PDP. I believe that the man who got the ticket got more appreciation from the opposition rather than those in the party who supported him. I don’t want us to repeat that mistake again. I think it is high time we finished the zoning so that anybody can aspire to become whatever is being zoned to his place,” he added.

Kwankwaso also underscored the need for fairness in the zoning arrangement, noting that all zones must be represented. “This is one of the mistakes of the PDP where they decided to lump so many good positions in a zone while others had close to nothing. And I think that has gone along way in killing the party. This country belongs to all of us,” he further stated.”

Commenting on the series of defections that have been witnessed in recent weeks, Kwankwaso said it was usual for many people to leave the party that lost for a party that won.

“In politics there are various groups, first class people who can take calculated risks, work hard to chart new way to bring new changes. Others will seat on the fence and see where the trend is and then falling in line and go by the side of success. Others head or tail will remain where they are.

“In fact the middle one are the majority looking round to see where the success is and move into it. I am not surprised many people are joining us now. We are happy,” he added.