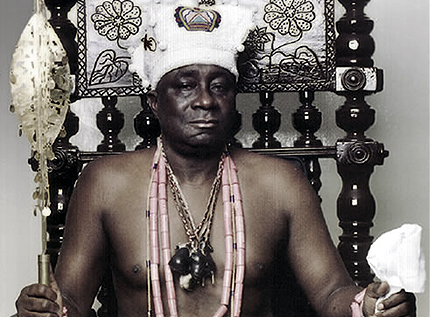 Lagos State chapter of the All Progressives Congress (APC) yesterday tendered an apology to Igbos in the state over an inflammatory statement by the Oba of Lagos HRM Rilwan Akiolu who threatened that Igbos who vote against his candidate in the April 11 governorship election will die in the lagoon.

The state APC Publicity Secretary, Joe Igbokwe, in a statement expressed the party’s sincere apology to Ndigbo and pleaded with them to bury the hatchet in the interest of peace and harmony.

“No human being is above mistakes. People can make mistakes and correct it thereafter. The Oba of Lagos can make a mistake and we believe that the statement credited to him was a mistake. If to err is human, we plead with Ndigbo to let the sleeping dog lie.

“After the March 28, 2015 presidential election, Ndigbo in Lagos have been trooping into the Lagos APC fold in droves. They have pledged to throw their full weight behind the APC gubernatorial candidate, Mr. Akinwunmi Ambode. The support was total and unprecedented. You can therefore imagine how we feel as a party when this incident came just a few days to the governorship election.

Speaking further, Igbokwe said the APC “passionately appeal to Ndigbo not to carry the statement credited to Oba Akiolu too far so as not to put a knife on things that have held us together for more than 50 years now. If out of annoyance you throw your cap away, a mad man will take it and use it forever.

“A lot is at stake in Lagos. Lagos has been fair to Ndigbo and Ndigbo have reciprocated by taking Lagos as their home no matter whose ox is gored. Lagos APC believes that Ndigbo will not burn the bridges because of this minor setback.

“Lagos APC has worked so hard with other Nigerians to enthrone a government at the centre and we cannot afford to throw all these gains away by allowing the mistakes of the last weekend to stand on our way to link Lagos effectively with the centre. Our own Oba Rilwan Akiolu’s slip of tongue should not be used as an excuse by Ndigbo to reverse these huge gains. Ndigbo should forgive and forget by voting APC en mass this coming Saturday,” he said.