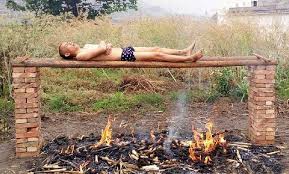 A leukemia sufferer in China, unable to pay for conventional treatments, is trying to kill cancerous cells by roasting himself over a fire. Oddity Central reports:

25-year-old Jia Binhui, from Yunlong County, southwest China’s Yunnan Province, was diagnosed with blood cancer two years ago. Sadly, he is unable to afford medical treatment, but that hasn’t stopped the resilient young man from trying to get better. In a desperate attempt to rid himself of the cancerous cells plaguing his body, he’s devised an alternate treatment that involves roasting himself in his backyard!

“They say experts believe a temperature higher than 42 degrees Celsius can kill cancer cells, so I set up a contraption in my backyard to try,” he wrote on his Weibo page. The human barbecue he built consists of a couple of logs propped up by bricks over a fire made from sawdust, twigs and branches. He burns the wood for several minutes until only hot coals remain, and then roasts himself for as long as he can tolerate the heat. “I’ve been told that it also works with water,” he added. “But it’s nearly impossible to keep water constantly at 42 degrees, so I’m using this method instead.