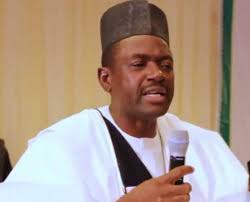 Candidate of the All Progressive Grand Alliance in Nasarawa State and ex-Information Minister, Mr. Labaran Maku, on Wednesday, rejected the result of the April 11 governorship election declared by the Independent National Electoral Commission, INEC, in the state.

In a statement issued in Lafia, the state capital, Maku said he would continue to fight for social liberty and justice.

The statement read, “We will fight until freedom, liberty and justice are attained for all our people regardless of ethnic, religious and social origins”.

The APGA flag bearer also alleged that there were widespread fraud, conspiracy and collusion among electoral and security stakeholders during the election.

He insisted that he did not lose the governorship election to incumbent Governor Tanko Al-Makura of the All Progressives Congress.

Maku further said the governorship election was marred by widespread reports of ballot theft and irregularities in government quarters.

Reacting to the allegations, the state chairman of the APC, Mr. Philip Shekwo, stated that Government House, Lafia, was not a polling unit for governorship election in the state.

“Government House, Lafia, is not a polling unit for the conduct of governorship election in the state”, he said.