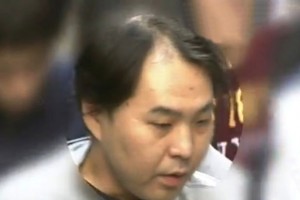 A PERVERT is said to have ejaculated on women while travelling on busy trains. Tetsuya Fukuda has been carrying out the vile act for four years, according to allegations. USA 24 reports:

The 40-year-old is said to have preyed on young women while travelling on busy commuters trains in Tokyo, Japan.
The alleged assaults took place on trains between Kinshicho and Akihabara stations in the city, acceding to police reports. Fukuda was arrested following police DNA analysis of Fluid found on an 18-year-old’s dress.

The schoolgirl reported the stain to police after suspecting foul play. It’s thought the man cut holes into his jackets so he could play with his genitals while on crowded trains. Alleged victim Ria Yoneda, 26 said: “It happened to me as well but I didn’t know who had done it. “It is just disgusting, he needs help.”

It’s reported Fukuda has admitted to carrying out the disgusting act on more than 100 women since 2011.
He is said to have told policemen when he was arrested: “I get excited when in close contact with a woman on a crowded train.” He is expected to appear in court soon to face sentencing for damaging property.