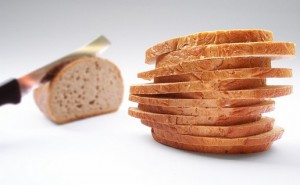 A man is in critical condition at a hospital after cutting his heart by swallowing bread that contained a razor blade. Odd News Blog reports:

The incident unfolded after 36-year-old Sariboga Osman of Turkey, bought bread from a bakery in Kocaeli, which he ate for dinner along with chicken. At some point, his wife noticed that blood was dripping out from his mouth. His wife, 30-year-old Dilek Sariboga, called an ambulance and said that her husband had swallowed a chicken bone.

The man was rushed to a nearby hospital, where doctors removed the razor blade. However, the blade caused damaged to the heart. Doctors said that the man was fortunate that his wife was home at the time of the incident, otherwise he would have been dead.