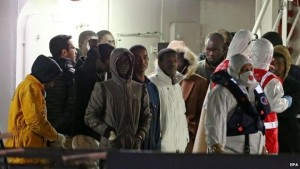 The Tunisian captain of a boat that capsized off Libya on Sunday, killing hundreds of migrants, has been charged with reckless multiple homicide, Italian officials say. BBC was there:

He has also been charged along with a Syrian member of the crew with favouring illegal immigration. The two were among 27 survivors who arrived in Sicily late on Monday. The authorities say the disaster was caused by mistakes made by the captain and the ship being overcrowded.

Prosecutors in the Sicilian port of Catania said the boat had collided with a Portuguese container ship just before it capsized, but absolved the merchant vessel’s crew of any responsibility.

They said the boat had keeled over after the collision which had been caused by steering mistakes by the captain and the panicked movements of the migrants on the 20-metre (66ft) former fishing trawler.