Home National News Odd News Meet The Indian Man Who Is On A Mission To Date 365...
Facebook
Twitter
WhatsApp 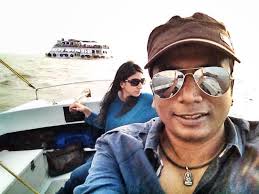 Indian photographer, Sunder Ramu is on a quest to date 365 women this year, but the guys swears he’s no Casanova. Scoop has more:

Sunder’s intentions are actually quite different than what you might imagine. It appears that he took up challenge simply as a way to meet more people. And he even has a rule – the women have to take him out and pay for the meal, or choose to cook it themselves. “I was getting too comfortable being alone, which scared me,” the fashion photographer from Chennai explained. “I decided that I was going to explore life and meet more and more people. Going to the club feels fake, and so I thought of going out on dates.”

In fact, most of the dates aren’t even romantic in nature. They’re more about having a good time and making new friends. Through his unique quest, he’s spent time with women of all ages and from different walks of life, and he’s had a wealth of experiences so far.

He has been on dates with Bollywood movie stars, journalists, but also the woman who collects trash from his building and a 105-year-old woman in a small village a ten-hour drive away. “I do not have any agenda behind going out on these dates,” he said. “I am not looking for a romantic relationship. It is not a playboy thing. I think this is something that women understand and that is the reason they agree to be a part of it.”