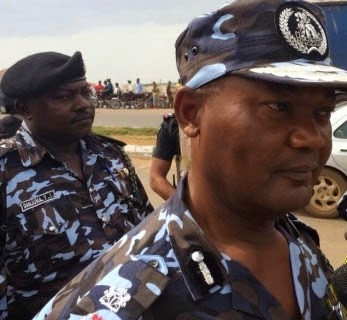 The controversial Assistant Inspector General of Police in charge of Zone 2, AIG Joseph Mbu, has said the threat he issued to kill 10 people for every policeman killed made the conduct of the general elections in Lagos State peaceful.

He made this assertion on Saturday at the state’s Command Headquarters after monitoring the election in some parts of the state in company of some journalists.

There was no chaos or fight in all the areas visited as residents cheered the police team.

However, three people were arrested along the Ikeja GRA for moving around in their cars while voting was ongoing, while a passerby, who attempted recording the scene, was equally apprehended.

His smartphone was smashed on the ground by a policeman.

At the end of the tour, the AIG lauded the courage of policemen in the state and the orderly conduct of the election.

When asked what was responsible for the peaceful conduct of the elections, Mbu said, “Generally, people are becoming more and more mature, sensitive and reasonable”.

He said, “And anyway, the statement I made, which generated a lot of (controversy); people misconstrued it all over, but that also helped the police because people say, ‘this man has come o and whatever he says, he means it’, and that also instilled fear in them.

“Go and check all the places where I have served, how many people have died? We don’t kill that way. But you have to instill fear so that people will have more respect for the police.

“You know how police were perceived those days, but now police give orders and people say police cannot do anything. But with those few words (I said), people are now scared and say, ‘if you misbehave, police are going to react’.

“Now we have succeeded as far as I am concerned”.