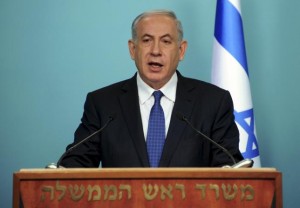 Israeli Prime Minister, Benjamin Netanyahu has urged the United States on Sunday to seek a better deal in order to curb Iran’s nuclear program and said he would press American lawmakers not to give Tehran “a free path to the bomb.” Reuters was there:

Netanyahu said he has spoken with both Democrats and Republicans in Congress – nearly two thirds of House of Representatives members and a similar number in the U.S. Senate – about the Iran nuclear issue.

The Israeli prime minister has been strongly critical of the framework agreement struck on Thursday between world powers and Iran, saying it threatens the survival of Israel. In appearances on U.S. television on Sunday, Netanyahu did not repeat his assertion on Friday that any final agreement should include a commitment by Iran recognizing Israel’s right to exist.

“This is not a partisan issue. This is not solely an Israeli issue,” Netanyahu said of the interim nuclear agreement, speaking on CNN’s “State of the Union” program. “This is a world issue because everyone is going to be threatened by the pre-eminent terrorist state of our time, keeping the infrastructure to produce not one nuclear bomb but many, many nuclear bombs down the line.”