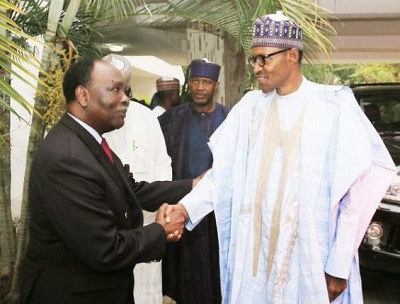 Former Head of State, Gen. Yakubu Gowon, said the peaceful conduct of March 28 Presidential poll won by Maj.-Gen Muhammadu Buhari, has shamed doomsayers that Nigeria would break up in 2015.

“No one will ever repeat that wild and arrogant prediction that Nigeria will go under; those doomsayers have been shamed and Nigeria will grow from strength to strength”, Gowon said in Jos.

While recalling the prediction that the country would disintegrate in 2015, Gowon declared that those that made the prediction did not reckon with Nigeria’s ability to solve its problems.

“The nation has always had the mechanism to tackle its concerns and this election and its peaceful outcome have proved that a united and focused nation would always survive and move toward greatness”, he said.

The former Head of State expressed happiness that the polls were adjudged free and fair by local and international observers, and commended the patience and resilience of the voters, who defied rain and the scorching to cast their votes.

“During the elections, I visited polling units in Asokoro, Karu, Nyanya, Maitama and Wuse; the people came early and in many cases waited for INEC officials that came late. I was touched by such commitment.

“I was also touched by the good spirit and camaraderie amongst the voters as they waited to vote; I was also happy that they were very friendly and did not allow their political differences to tamper with the fact that they all had one destiny”, he said.

Gowon also commended INEC officials, especially the NYSC members, for insisting on doing the right thing, and urged Nigerians to keep that spirit so that democratic governance would come of age.

He specially praised President Goodluck Jonathan for quickly calling to congratulate the winner, and described that step a “very soothing balm that ended all fears and anxieties”.

“There is no doubt that it set the tone for peace because the situation would have been otherwise if he had remained silent and allowed his supporters to interpret that silence their own way.

“It is something that has never happened in Africa, and definitely not in Nigeria, so we must respect that spirit and challenge other politicians to emulate it”, he said.

Gowon advised Buhari to listen to Nigerians and do their bidding.

“Nigerians wanted a change, so Buhari must offer that change. They complained of corruption, insecurity and a slow economy. The new helmsman must address these issues”, he said.

While wishing Buhari divine wisdom, he challenged him to strive to do better than his predecessor so that Nigerians would see and feel the difference. (NAN)