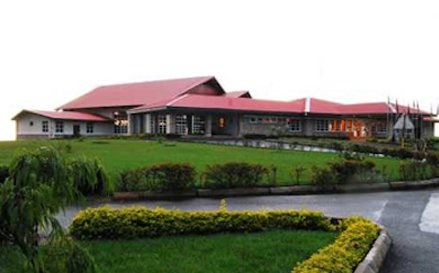 A N2 billion mansion overlooking the Presidential Villa is currently giving the country’s security apparatus sleepless nights as a result of its security implications for the seat of power.

The mansion, according to THE NATION, was just completed by an unnamed outgoing governor from the North.

It is said to be built at an elevated point within the precincts of the Villa, making the president’s official residence prone to possible “espionage” from the outgoing governor’s comfort zone.

It was not clear if the governor would be asked to remodel the new residence, be subjected to an undertaking or be placed on surveillance.

Investigations by the newspaper revealed that the governor had acquired the choice plot, said to be worth over N1 billion, in anticipation that he might play a key role if President Goodluck Jonathan was re-elected.

Further to this plan, the governor had planned his life outside office such that he would be just a stone throw from the seat of power. However, his dream crashed following the defeat President Jonathan suffered in the hands of Gen. Muhammadu Buhari (retd.).

Findings, however, revealed that the new mansion of the governor had been a source of security concern even before the general elections.

According to a top source who spoke in confidence, the mansion was erected on an elevated level that “gives a view of movement in and out of the Presidential Villa”.

The source added: “The over N2 billion posh residence poses a security worry because with sophisticated equipment, the governor, as from May 29, can conduct some surveillance on the Villa depending on his political leaning or mischief.

“No one is comfortable with this development. Based on security audit, the elevation of the mansion is not good for the Presidential Villa.

“If the governor compromises after leaving office, the residence can be used for espionage or any other challenge”.

Another source however said: “I think the governor wanted to be a nominee for the Vice Presidential ticket but lost out to Vice President Namadi Sambo during the intrigues. It was in line with his target that he opted for a house near the Villa.

“I think there are three options available to the governor. These are: to remodel or reconfigure the house, be subjected to a security undertaking or be placed on permanent surveillance”.

It was also learnt that the governor had explained that the land was rocky reason it appeared the “elevation” is a bit higher.

“The house was built with the best of intention and not for any political or pecuniary gains. The Villa itself presents a scenery of an undulating landscape.

“Take a look at the Presidential Villa’s neighbourhood, many ex-governors, permanent secretaries, senators and others have houses there”, another impeccable source added.

At press time, it was gathered that the governor might be probed by anti-graft agencies on the billion-naira mansion at a time it was difficult for his state to pay some entitlements of workers, who have retired from public service.

An anti-graft source said: “The house is worth over N2 billion. The governor might be investigated after May 29 when he will no longer enjoy immunity from trial”.