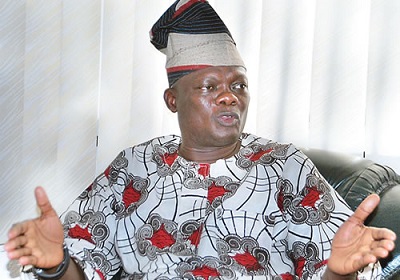 Ahead of the official announcement of results of Saturday’s governorship election in 33 local government areas of Oyo State by the Independent National Electoral Commission, INEC, the candidate of the Peoples Democratic Party (PDP), Sen. Teslim Folatin, has conceded defeat.

He conceded defeat in a radio broadcast at about 9:30 pm Saturday, thanking voters for their support.

Folarin, in the concession message aired on an Ibadan-based private radio station, Splash 105.5 FM, said feelers from his agents in polling units across the state confirmed to him that there was no way he could still win the election, which has turned out to be a three-way contest between incumbent Abiola Ajimobi (APC), Rasheed Ladoja (AP) and Adebayo Alao-Akala (LP).

“For the eventual winner, I congratulate him in advance and promise to personally call him when he is declared the winner. For us, the people have spoken and we respect their wish. Thank you”, Folarin said in the broadcast.

Speaking with journalists after his accreditation, the PDP flag bearer said the card reader introduced by INEC was a “disaster”​.

“The use of the card reader by INEC is a disaster”, he said. “Two weeks ago it worked well, but today the officials say it could not capture my thumb print”.