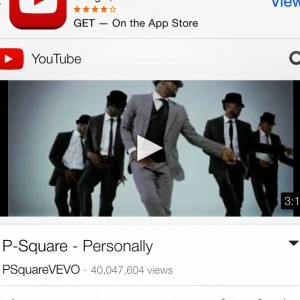 It’s from one height to the other for the P-Square brothers.

They have hit another milestone as their hit single ‘Personally’ hit the 40 million YouTube mark, the first time for any Nigerian music video.

The video was released in June 2013 as a tribute to late Pop star, Micheal Jackson.