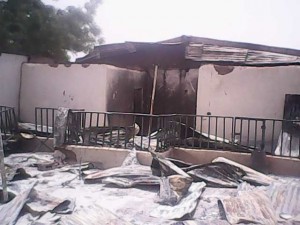 One person was on Monday killed as irate youths set a Baptist Church at Gidan Maso village in Rogo Local Government Area of Kano State ablaze. The residence of the pastor, Rev Habila Garba, was also burnt. The deceased was one of the pastor’s daughters, who died of suffocation.

The incident is coming barely a week after unidentified arsonists attacked a branch of Living Faith Church, popularly called Winners Chapel, at Giwa in Kaduna State.

President of Tarayyar Masihiyawan Nijeria (Hausa, Fulani and Kanuri Christians), General Ishaku Ahmed Dikko (retd), told newsmen yesterday in Abuja that the intention was to kill one youth, Yahaya Joshua, who converted to Islam but later reverted to Christianity.

In a statement, Dikko called on the state government to live up to its statutory responsibility of ensuring protection of lives and property.

“The Baptist Church at Gidan Maso village of Rogo Local Government Area in Kano State was set on fire by youths of the village on April 1 at about 7:30p.m.

“The church and all the properties were burnt down in the presence of the Christian community despite all pleadings for them to stop the destruction.

“The arsonists gathered cornstalks, put them inside the church before setting it ablaze. This made the action to seem deliberate and for ulterior motives.

“The Christians present exhibited great Christian qualities by not taking the law into their hands by trying to stop them by force.

“Rather than see reason, the arsonist were infuriated which led to setting the house of the pastor, Rev Habila Garba, ablaze as well.

“One of the pastor’s daughters died of suffocation and most parts of the house destroyed.

“They also attacked and wounded Bawa Adamu and Aminu Dauda, who received machete cuts leading to broken arms. Others received similar wounds, but of lesser degrees.

“The cause of the barbaric act was to kill one youth, Yahaya Joshua, who converted to Islam but later on reverted back to Christianity.

“He had escaped on learning of the plan to kill him. They therefore set the Church and Pastor’s house on fire and went about maiming and wounding any Christian they saw.

“The incidence was immediately reported to the Police and the District Head at Rogo. No information has been received about the action taken or if any arrests were made.

“However, all the wounded know and can identify their attackers by name since they all belong to the same village.

“The Tarayyar Masihiyawan Nigeriya is calling on the authorities to take the necessary steps to stem or stop all these harassments and molestations of innocent Christians for whatever reasons.

“We have the right to belong to any religion of our choice and live anywhere in this country.

“We call on the authorities at all levels to rise up to their responsibilities to protect lives and properties of every citizen in this country,” he said.