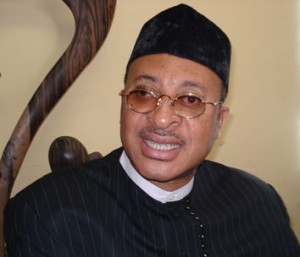 Prof. Pat Utomi has described the series of defections by politicians in recent weeks as unfortunate, saying is not good for our democracy. He said he may join the People’s Democratic Party (PDP) in order to build a strong opposition party.

Speaking on Sunday in Abuja at the sixth graduation ceremony of Centre for Leadership, Strategy and Development (Centre LSD) after presenting a topic on: ‘Leadership and Societal Development’, Utomi stressed the need to have a strong opposition that would put the new ruling party, the All Progressives Congress (APC) on its toes.

The centre has graduated 441 students in the six years of its existence. It graduated 49 students this year.

“I found the gale of defection unfortunate, I think if I have not spent the last sixteen years saying we must build a strong opposition, it would be the time for me to join the PDP really, because we really need to rebuild PDP, we need to have strong PDP to hold APC in check.

Utomi noted that Nigeria has several problems and the incoming administration cannot solve all the problems. It therefore, only needs to focus on some of it.

Out of his recommendations for the incoming government, Utomi emphasized that there was need for a major reform in the civil service, especially the lacking capacity building.

Utomi also lamented the cost of governance in the country. He described it as unsustainable. “If a couple of things are not down in a matter of now, in the next couple of months Nigeria will be before IMF, that’s how bad things are.

“This country must as a matter of now deal with a few extra ordinary questions about the cost of governing Nigeria which is part of the challenge we are dealing with.

“If we don’t trim by 80% the cost of running our federal legislature. We are in serious trouble as a country. We don’t need a National Assembly that cost as this much,” Utomi said.

The professor of economics also lamented the corruption in the petroleum sector. “The reason why some of us match during occupy Nigeria is because we knew what is called subsidy was a pure scam…This year we will spend about N1 trillion on a blotted bureaucracy in recurrent expenditure and prevent us from doing the things that will make the quality of lives of Nigerians get better.”