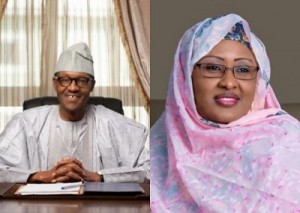 She might have hauled insults at the president-elect Muhammadu Buhari ahead of the presidential elections, but Dame Patience Jonathan has followed her husband’s footstep of showing gracefulness in defeat by congratulating the wife of the man who took her husband’s seat.

She congratulated Hajia Aisha Buhari today, on the election of her husband, in a statement signed by Ayo Adewuyi, Media officer to the First Lady.

In the statement, Mrs Jonathan appealed to Nigerian women to work with Mrs Buhari and give her the maximum support to make her succeed in her new assignment.

“The First Lady (Mama Peace) wishes her well in her new task,” it stated.

The president-elect had during the course of his campaign vowed not to have an office for First Lady. “The [office of] First Lady is not in the constitution, so there’s no official role for them,” he said.

Mrs Buhari in support of her husband’s stance said she would limit her roles to the traditional functions of visiting orphanages and caring for the less privileged in the society.

“When my husband is elected as the president of this country, he will rule the country within the rule of law based on the constitution of the country.

“If the office of the first lady is constitutionally recognised, he will not tamper with it, but if it is not, that’s okay.

“For me, I will perform my duties and role as the wife of the President of Nigeria traditionally. Wives of presidents have some traditional roles, like receiving guests, visiting orphanages, helping the less privileged people.

“They also lead in the fight for the right of women and malnourished children, infant mortality rate, fight against kidnapping and girl-child trafficking,” she said on the sidelines of the inaugural meeting of the APC women presidential campaign initiative held in Abuja in January.