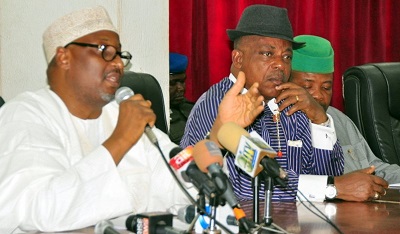 In a statement, which he personally signed on Wednesday in reaction to the defeat suffered by the PDP in the just concluded presidential and national assembly elections, Mr. Mu’azu went down memory lane, recalling how the ruling party has impacted positively on the lives of Nigerians and strengthened institutions in the last sixteen years at the helm of affairs.

“Sixteen years ago, Nigerians gave our great party, the Peoples Democratic Party (PDP) the mandate to build, nurture and deepen democracy after three decades of military rule in our country.

“That historic mandate was freely given in recognition of the courageous and patriotic role of the founding fathers of our party whose resilience and doggedness championed the return of democracy and the personal freedom we all enjoy today.

“Within this period, our party worked very hard in rebuilding and strengthening democratic institutions, tenets and norms while lifting our status as the leading democracy in Africa and one of the best in the world.

“It is incontrovertible that under the PDP-led government, our nation moved from a near pariah status to a strong actor in the international democratic arena, a product of various electoral reforms and our iron-cast commitment to transparent, free and fair electoral process at all levels.

“Even in the midst of obvious threats to our democracy, the PDP and the government it sponsored continued to stabilize the polity through strict adherence to rule of law and liberalization of the political and economic space.

“In the last 16 years the PDP-led administration achieved significant milestones in our social and economic lives. We moved Nigeria from a debtor nation to Africa’s largest economy and one of the fastest growing in the world, a feat, which is accompanied with unprecedented expansion of the private sector as well as multi-sectorial infrastructural development, all, great legacies we achieved for our nation.

“Presently, our nation is at the threshold of history and its defining moment for the future. As you are aware, in the early hours of Wednesday, April 1, 2015, the Independent National Electoral Commission (INEC) returned the candidate of the All Progressives Congress (APC), Gen. Muhammadu Buhari as winner of the 2015 presidential election.

“However, we have received reports of serious irregularities that characterized the conduct of the election and we shall channel our protests to the appropriate quarters in line with our profound respect for the rule of law and democratic ethos.

“Our party comes with great values and tradition and we will adhere to them and ensure that nothing is done to truncate our democracy, which we have proudly worked so hard to nurture and sustain to maturity.

“Therefore, if the outcome of the election is truly the reflection of the wishes and aspirations of our citizens, the PDP will most willingly respect that wish.

“What is paramount to us is the survival of our democracy, the unity, peace and progress of our dear nation and the happiness of all our people. Nigeria is bigger than any political party, individual or group and her overall interest must be our priority at all times.

“It is in this light that we as a party commend our flag bearer, President Goodluck Jonathan for his heroic act in conceding to the voice of the people, an action that stands him out as a true democrat and a statesman.

“We also congratulate the APC flagbearer, Gen. Muhammadu Buhari for his resilience and victory in this election while wishing him success in the onerous task of leading our nation once again.

“On the same note, we wish to also commend the electorate for the peaceful manner with which they conducted themselves in the course of this election.

“For us in the PDP, we want to state in very clear terms that we are not down. We are only at our redefining moment. Rather than demoralize us, this election has afforded us great lessons and we are now more than ever before reinvigorated for the race ahead.

“As we return to the electorate for the April 11, 2015 governorship and state assembly elections, we go recharged with faith in our heart. We assure all our candidates in the remaining elections that the party will stand with you, campaign with you and work vigourously to ensure your total victory at the polls.

“Finally, we call on our party faithful to remain steadfast in our renewed effort to deliver our flag bearers in the remaining elections”.