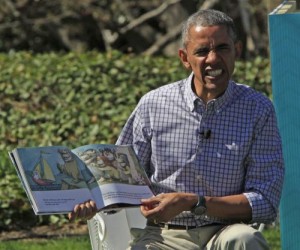 US President, Barack Obama was trying to read to children during the White House Easter Egg Roll when some bees came by and made them scream. UPI was there:

The president was reading “Where the Wild Things Are” by Maurice Sendak when some bees approached the children. Many of the children started screaming loudly and trying to move away from the bees.

The children were not calmed by the president’s words and continued to scream.

“Hold on! Hold on! You guys are wild things! You’re not supposed to be scared of bees when you’re a wild thing!” Obama said, laughing.