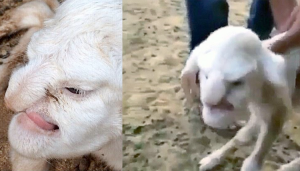 In a in village of Chirka, close to the Russian republic of Dagestan, a 45-year-old sheep farmer named Blasius Lavrentiev said he ‘nearly died’ when he saw it. He had been expecting one of his sheep to give birth for a while and he was looking forward to being able to sell babies. However, Blasius was not expecting to see what he saw on the face of this lamb. Huzlers has more:

“We had quite a tough winter but when I noticed she was pregnant I was delighted as it meant I would be able to sell the lambs and start making some money again. But when I went down to see how it was going I nearly died from shock when I saw what looked like the hairy face of an old man staring up at me,” said Blasius.

Apparently some of the superstitious locals thought the sheep farmer had been having s*x with his sheep which resulted in this freaky little thing. To that ridiculous claim, all one can do is “smh.” If humans could mate with animals and create cross breeds, there would be all kinds of funky human/animal babies running around here.

A local veterinarian by the name of Dorofei Gavrilov said, “From what we can make out the anomaly is the result of the farmer giving the lamb’s mother too much vitamin A.” Vitamin A did that? Wow. Well, the sheep farmer doesn’t seem to care what caused this deformity. “Whatever has caused it, she’s a little beauty and I definitely won’t be selling her for anyone’s dinner table either as the buyers want her on display.”