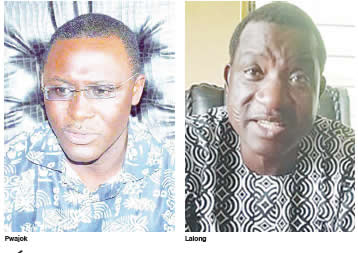 The Peoples Democratic Party governorship candidate in Plateau State, Sen. Gyang Pwajok, has promised to support the governor-elect of the state, Mr. Samuel Lalong of All Progressives Congress.

Pwajok made the pledge on Tuesday in Jos at a press conference.

He said, “Leadership is from God and He gives to whoever he desires at a particular time.

“We can build a greater Plateau when we work together irrespective of our ethno-religious differences”, he said.

Pwajok said his major concern was ensuring that the next generation and the future of Plateau is as bright as the promises of God.

The candidate expressed concern over the spate of internal and external opposition as well as challenges that bedevilled his ambition.

“We experienced internal and external opposition challenges characterised by hurtful ridicule, intimidation and attack against those who preached against hateful statement and kicked against ethnic sentiments”, he said.

He condoled with the families of those who were injured and those who lost their lives during the electioneering.

“Many people were injured and harassed because they preached transparent process and freedom of choice by the electorate.

According to him, the deceased was insisting on orderliness and freedom of choice for electorate but was allegedly shot by a team of security personnel while defending democratic principle.

He said the process of change requires invigorating strategies to achieve its effectiveness. (NAN)