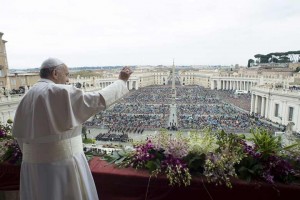 Pope Francis prayed for an end to the persecution of Christians in his Easter Sunday address, commemorating the students massacred by Islamist militants at Garissa University in Kenya. Reuters reports:

Francis, after saying Mass for thousands of people in a rainy St. Peter’s Square, delivered a mostly somber and grim “Urbi et Orbi” (to the city and the world) message. Attacks on Christians in Africa and the Middle East have been the grim backdrop of all Holy Week ceremonies leading up to Easter.

“We ask Jesus, the victor over death, to lighten the sufferings of our many brothers and sisters who are persecuted for his name, and of all those who suffer injustice as a result of ongoing conflicts and violence – and there are many,” he said. The pope spoke as churches in Kenya, where al Shabaab gunmen massacred nearly 150 people, singling out Christians for point-blank executions, turned to armed guards to protect their congregations on the most important day of the Christian liturgical year.

“May constant prayer rise up from all people of goodwill for those who lost their lives – I think in particular of the young people who were killed last Thursday at Garissa University College in Kenya – for all who have been kidnapped, and for those forced to abandon their homes and their dear ones.”