Still in the spirit of statesmanship, President Goodluck Jonathan has made one last request from Nigerians on behalf of the President-elect, General Muhammadu Buhari. 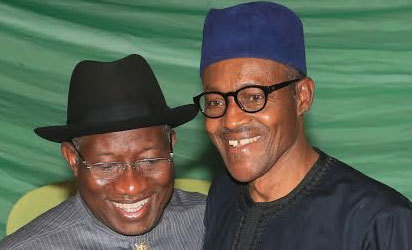 President Jonathan said the incoming President, General Buhari can only succeed if Nigerians cooperate with him and are ready to make sacrifice for the nation.Speaking on Sunday at the Presidential Villa while playing host to those that paid him the traditional Easter homage, President Jonathan tasked Nigerians to be ready to sacrifice in order to guarantee a great and prosperous nation, Vanguard reports.

According to him, those countries whose leaders succeeded achieved such success because of the sacrifice of its people.


“Nation building depends on the sacrifice of individuals and the patriotism of the citizens. These are two key elements; we must be ready to sacrifice for our nation. If you are a businessman and you say you are supporting government but you don’t pay tax, how do you expect that government to survive? That government will not survive. To me whenever I travel to different countries and see things work, those things didn’t fall down as manna people made sacrifice, therefore in Nigeria people must also be ready to make the required sacrifice. Whoever becomes president is immaterial ‎so long as the citizens are happy. Our children go to school, when we are sick they go to good hospital and of course the economy blossoms” he said.

The second bid loss of President Jonathan has indeed given him the opportunity to reflect on the past. Mr. President today, Sunday April 5 looked back at his years of service from being the deputy governor of his home state, Bayelsa, to when he became the President of the Federal Republic of Nigeria.

General Muhammadu Buhari won the presidential elections with 15,424,921 votes, or 53.95%, of the 28,587,564 total valid ballots cast according to the announcement made by the Independent National Electoral Commission (INEC) in the early hours of  Wednesday, April 1, 2015.