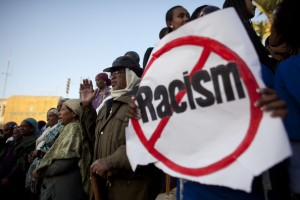 Demonstrators rallied on Wednesday against what they described as a culture of police brutality in South Carolina in the case of a white officer caught on video killing a black man by shooting him in the back as the man ran away after a traffic stop. Reuters have more:

Holding signs that read “The whole world is watching” and “Back turned, don’t shoot,” dozens of protesters in North Charleston said the death of 50-year-old Walter Scott on Saturday should not be viewed as an isolated incident.

“There is an atmosphere of racism in North Charleston, and we need to get rid of it,” said Ramon Roane, 52, one of the speakers who gave examples of what they called unfair treatment by city police and leaders amid chants of “No more! No more!” by the crowd.

Police officer Michael Slager was charged on Tuesday with murder in the death of Scott, the latest among several shootings over the past year, including in New York, Ferguson, Missouri, Cleveland, Ohio and other places. The shootings have stirred debate across the United States about police use of lethal force and race relations, also drawing President Barack Obama into the discussion.