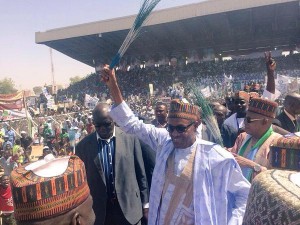 Nigerians have placed high demands on the president-elect Muhammadu Buhari following his pre-election promises. The enormous task ahead of him now requires him to take some drastic measures, according to a former Chaplain of Aso Villa during the administration of former President Olusegun Obasanjo, Reverend William Okoye.

Okoye said this during his Easter sermon on Sunday entitled: “God is in charge and in control – Nigerians should thank God for a peaceful election. He urged Buhari to revisit the Stephen Oronsaye-led Committee’s report on civil service reforms which recommended scrapping of some agencies for guidance as he advises that the president-elect reduces the cost of governance and cut down the number of political appointees.

He also advised that Buhari focus on eradicating mediocrity in governance which, he noted, “is usually fueled by too much consideration on ethnicity, religion, gender and political affiliations”.

With the President-elect said to have reared cattle as a little boy, Okoye challenged him to use his experience to “bring an end to the incessant clashes between farmers and Fulani herdsmen across the country.”