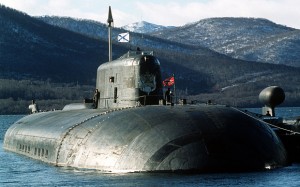 A nuclear submarine caught fire in a shipyard in Russia’s northern province of Arkhangelsk early on Tuesday but there were no weapons on board, Russian news agencies reported. Reuters has more:

The Emergencies Ministry declined comment on the reports of the fire at the Zvyozdochka shipyard, where the agencies said the 155-meter-long (just over 500 feet) 949 Antei submarine was being repaired. There was no word of any casualties.

“There is a fire on the submarine. We are fighting the fire now,” a shipyard source told Interfax news agency.

RIA quoted a spokesperson at the shipyard as saying there were no weapons on board the submarine.

A source told TASS news agency the submarine’s nuclear reactor had been shut down prior to the blaze.

“The active zone of the reactor was unloaded at the start of repairs a few years ago,” the source said.