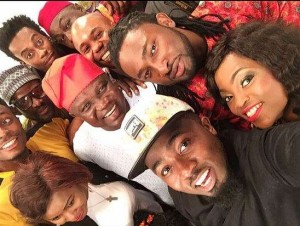 It was very clear that most of the Nigerian entertainers were solidly behind APC’s governorship candidate, Akinwunmi Ambode.

While some of the entertainers are currently out of the country, others have only continued to show support to their chosen candidate on social media.

Leading the pack is Olamide and Dammy Krane, who are in the country but have only posted pictures of campaign support materials on their Instagram and Twitter accounts.

These are yet to upload pictures of themselves voting or getting accredited to vote for the APC candidate.

Meanwhile, Iceprince, Yemi Alade and Obafemi Martins, who are currently not in the country, have continued in their support for Ambode on social media in their various locations.

Meanwhile, EME boss, Banky W voted and revealed that he voted for Ambode at the polling unit in Omole area of Lagos State.