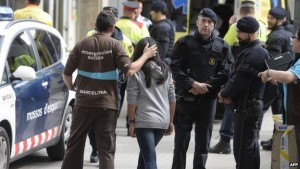 A student armed with a crossbow has killed a teacher at a school in Barcelona, Spain, local media say. BBC has more:

The suspect, reportedly a 13-year-old boy, has been arrested. His motive is unclear. Police have not confirmed the weapon used or whether he was a pupil at the Instituto Joan Foster.

At least four other people were injured in the attack. The teacher killed was protecting another during the incident, El Mundo newspaper reports.

According to Spanish media reports, the boy, said to be also armed with a knife, arrived at a class on Monday morning when he injured a teacher and her daughter, who was a student of hers.

Hearing screams, a male teacher who was there as a substitute entered the classroom and was killed. The Mayor of Barcelona, Xavier Trias, tweeted that he was appalled by the incident and has pledged his support for those affected. Spain’s ANPE teachers union says it is the first documented case of a pupil killing a teacher in the country.